During the Civil Rights movement my parents were attending college, then a hotbed of student activism, and I was in grade school. Because of what was happening in the world at that time, I was very aware of the national prejudice toward people of color. This was a time of violent protests and assassinations. The grownups were killing one another and burning down buildings.

We had lived in several small towns within northeastern Oklahoma, and I never had the opportunity to meet an African-American person until I was nine years old.

That summer I competed in a Junior Olympics track meet. Two girls of African descent were in the same heat as me. I walked over to those girls, shook their hands, and wished them well, a small white ambassador of peace. The heartbeat of love was already within me because Christ dwelt there. Even at that age, I knew we were all fellow human beings, members of Adam’s race, kin and family.

Gradually the Lord brought more people of color into my life as we moved around the middle of the country. Soon I had friends of Hispanic, African, South American, and Middle Eastern origin. I am curious. I asked questions. I listened. I learned. More and more it became apparent to me that though legally equal, in practice this wasn’t so.

For them wages were lower. Housing often wasn’t adequate. Police attention was often unwarranted. Teachers were harsher. School counselors didn’t guide them toward success. Recognition wasn’t always given. Car loans were withheld. Advancement wasn’t awarded. People called them names. They were the brunt of jokes. Most of society didn’t care. Not much has changed.

Growth in human beings is often slow. My work in prison ministry opened my eyes even more. I learned that people of color are far more likely to be arrested and to have undergone the experiences that cause people to end up in prison. Listening to their stories, I knew I still had much to learn.

I decided to push into what God was teaching me. I reassessed my social media usage as an author. Most of the people I followed and read were white. That had to change.

God brought scholarly articles across my online world. I’ve been reading a broad group of intellectual Christian African-American thinkers with PhDs – pastors and leaders. I followed them. I read. I listen. I again subscribed to Christianity Today, a source I had dropped in the 1980s when it became too political. I push toward racial harmony.

Through these interactions I discovered that many white leaders of the Christian world in America were also doing the same. We’re all disquieted, grappling with the continuation of inequalities against people of color and wondering how to eradicate these injustices, which never should have existed, especially within the church. We have all experienced pushback from other white Americans. This is a spiritual battle.

We are often blind, and so we change slowly. I love it when the Lord is working on something within our hearts and then we discover that he is also moving in the hearts of others all over the nation, that a work of the Spirit is clearly in motion in a powerful way. Through these connections, I discovered that God is bringing change. He is bringing repentance and justice. 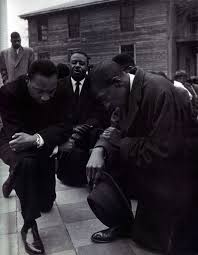 Because of all this growth, I participated via simulcast in a conference that occurred in Memphis, Tennessee, last week during the commemoration of the fiftieth anniversary of the brutal assassination of the Reverend Dr. Martin Luther King, Jr. Many Christian leaders were involved.

Of all the messages, I was most profoundly impacted by words of love and wisdom from a Civil Rights pioneer in this spiritual battle, Dr. John M. Perkins. His message fleshed out this reality:

Salvation doesn’t only save me as an individual. It makes me a member of Christ’s body. Believers are siblings and co-heirs with Christ. There are no believers of any ethnic group from whom we can remain estranged. We are our brother’s keeper. We must see that they are treated justly. We must advocate for them as if they were blood family, because they are. Bought with Christ’s blood, we are now one in that blood, all members of one race – Adam’s race.

Racial reconciliation is part of spiritual reconciliation. Ephesians 1 stands with Ephesians 2. It’s non-optional. Racial harmony is the working out of the gospel if we are to walk as true coheirs with Christ. Please view this book trailer of Dr. Perkins’ final manifesto. Pray and ponder the condition of your own heart, as I have been mine. Let’s bring true change. Let’s live Ephesians 2.