Dear writer, don’t despise your humble beginnings, whether these include your level of education, the size of your community, or the poor and simple family life from which you emerged. Don’t fear, even if people look down on you for your “lack of credentials.”

When Jesus appeared on the scene, the people expected Messiah to be an earthly king. They didn’t look for him in a carpenter’s shop or as a baby born in a barn. They didn’t expect him from a backwater town like Nazareth of Galilee, though Isaiah had prophesied. They didn’t yet grasp all that he would be. Nor could they see all God intended to do with his Son.

“Coming to his hometown, he began teaching the people in their synagogue, and they were amazed. ‘Where did this man get this wisdom and these miraculous powers?’ they asked. ‘Isn’t this the carpenter’s son? Isn’t his mother’s name Mary, and aren’t his brothers James, Joseph, Simon and Judas? Aren’t all his sisters with us? Where then did this man get all these things?’ And they took offense at him” (Matthew 13:54-57 NIV). 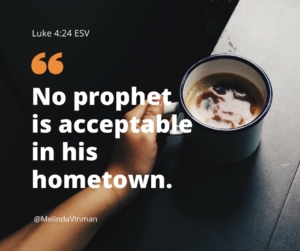 As a writer, you will face comments and attitudes like these, if you haven’t already. Who are you, by the way, to be writing a novel, of all things? Who are you to be a published author? How could this happen to you?

When my first book published, some of the comments I heard were along these lines. One woman from my hometown whispered to me, “You copied that out of someone else’s book, didn’t you? You can’t write like that.” I assured her that, no, Refuge was an original novel written solely by me. She walked away shaking her head.

Another woman came to me in church, gazing upon me as though she were seeing me for the first time, as if I were a strange and exotic creature. She said, “Here you’ve been, sitting here all these years, and I had no idea you could do such a thing! How did you write that? You’re just . . . you!” It didn’t seem to occur to her that she was belittling me and my hard work.

Apparently, these women saw no sign of promise. In fact, they didn’t see me at all.

Only God sees us clearly.

Our friends, our church body, even our family often don’t see who we really are. Usually, we’ve been pigeonholed into a category – wife and mother, single woman, the lady who teaches the Bible studies, the neighborhood homeschool mom, the kid I grew up with, the offspring of Dan and Elaine, that quiet brainy girl. Some people you know and love will never read your work, because mentally they can’t get past this hurdle. This will hurt.

But, no matter where you’re from or who you are, no matter whether you’re seen clearly by those around you, no matter what others think, God can and will use you and your work for his glory. He alone sees you with crystal clarity.

Write what he places on your heart. Go out into the wider world with your offerings. Those whom God intends to be blessed by your words will read them. They will see you through the appreciative eyes of ones who benefit from the gift that God has placed in you.