The publication process of editing and design will soon begin on The Shadows Come, the sequel to No Longer Alone.

YOU can be a part of the process!

In this novel, America enters The Great War. Here’s a sneak peek at draft registration day for the citizens of Wakita in The Shadows Come:

The sun beamed over the horizon as Prentis headed toward town. When he arrived, he saw that everyone had acted upon the same impulse, arriving as early as possible. They were to begin at 7:00 a.m. The downtown teamed with young men anxious to get this task completed. Prentis wished a parade hadn’t been planned, so they could all simply get back to their wheat harvest. God only knew what tomorrow’s weather might bring.

Many of the oldest men in town–veterans of the Civil War–were on site. Other than elected officials, the rest of the crowd were all young men registering. The other men appeared to have gone out to keep harvest going for the young men, lest any crops be lost to bad weather.

Both saloons had been transformed into restaurants for the day as no alcohol was to be sold. Their doors were thrown wide, displaying well-lit interiors serving more substantial fare. No alcohol was in sight. Men stood inside drinking coffee while eating what looked like pancakes and eggs. The livery, the general store, and the bank were also well-lit, though not open for business quite yet. Registration day looked to be profitable for the town’s businesses.

From inside one saloon Floyd Slaughter and Joseph Pitzer hailed him. John Slaughter stood outside on the boardwalk with Tom McKinney. All were eating steaming plates of food with hot cups of coffee balanced precariously on the edges. Prentis tied Hector to the hitching rail, shoulder to shoulder with their horses. The downtown was packed. Overheated horseflesh and fresh manure provided fragrant surroundings to mingle with the pancakes and coffee.

“Pink!” John Slaughter called. He stood at the other end of the hitching rail, cramming enormous bites of pancake into his mouth as quickly as he could.

“John.” Prentis nodded. “Never saw you stuff your food in quite so fast.”

“Momma’d kill me if I went in there with Floyd, no matter whether they’re serving hard drink today or not. Daddy might do worse. After that, Bernice would take a whack at me. They’re already gonna be mad at me when this is over, so I decided to stay outside. Told the proprietor I’d eat as quick as I could, so he could have his plate back for the next customer.”

“Sounds like a workable plan. Curious why they’d be mad at you though.”

“Don’t intend to take the exemption,” John said before devouring half a pancake in one bite.

Prentis was taken aback. “You’re willing to leave Bernice and your baby to go fight?”

“Yes, I am,” he mumbled around the pancake. “Hope they draft me. Can’t stand injustice.”

Prentis knew that to be true. He recalled that John had gotten into a fistfight over the poor treatment of native people and people of African descent in the moving picture Birth of a Nation when it was featured at The Electric Theater in 1915. After the fight, John had almost ended up in jail but had paid a fine instead. Of course, he would want to go fight in Europe. Prentis decided to leave that topic alone.

“Didn’t know you were registering down here, John.”

“I’m not. Got up early to ride down to see you all before I head back to Gibbon to register. Jerry and Fred are holding me a place in line up there.”

“P. J.” Tom handed him a steaming cup of coffee.

He nodded his thanks. “Registering for the draft doesn’t give me much appetite. But I can always use coffee.”

John now stood at the saloon door, calling for Floyd to come get his empty plate. He clearly took seriously the threat to his health that might result if he stepped inside.

The sun blazed now at full strength casting long shadows toward the west, illuminating the teeming mob in sharp relief. Several hundred men milled about the barely two-block-long downtown, along with some of their wives and families who had accompanied them. Grant County officials scurried here and there, running back and forth from the school right north of the downtown. Already the day was heating up. They would swelter in their wool suits for a large part of this day. It looked to be unpleasant.

Floyd and Pitzer strutted out of the saloon, appearing fortified and ready for the registration. Pitzer’s eyes were bloodshot, as if he’d done a little fortifying with alcohol the night before.

“Pink.” He reached for Prentis’s hand.

As they shook hands, Prentis noticed that a hush surrounded them, as though the crowd had drawn back a step, so all could observe this friendliness between the two.

“Saw that boy of yours last week.” Pitzer threw his arm around Prentis’s shoulder. “He’s the spittin’ image of you, other than he’s got Avery’s eyes.”

“That’s what everyone tells me. Avery and I are pretty proud of him.”

“And you should be. Looks to be a good strong boy.”

Pitzer then shook hands with John and Tom. Floyd met Prentis’s eye. Both nodded, well aware of the audience and the conveyed message. Their cool exteriors hid the deep burn of anger under the surface of their composed expressions. Avery’s integrity had been called into question, Avery–Sunday School teacher, Bible school graduate, and the kindest and purest woman Prentis had ever known, a true woman of conscience–sullied by a mean-spirited gossip. It was all he could do to keep his visage stoic. Like Avery, he determined that he would not hate that woman.

“Likewise. No matter the occasion.”

All of them lapsed into discussion of their individual harvests, what kind of yield they had gotten so far, and how the wheat was testing at the elevator. Periodically they laughed at something John or Pitzer said. Eventually, the volume of the surrounding men discussing their own harvests and the war returned to normal. The show was over. Nothing to see here.

The mayor now stepped into the bandstand, lifting a bullhorn.

“It’s now seven a.m., so we’re ready to begin. We’re attempting to run this occasion with military precision. Everyone can now head north toward the school. Line up, one behind another. Snake your line down the street as far as need be. When it’s your turn, step up to one of the available registrars. Be sure to have your answers prepared, so you don’t slow down the process. As soon as you’re done, skedaddle on out of there.”

Everyone chuckled at this final statement, so much for the military nature of the event.

By pledging as little as $5, you’ll receive a free copy of The Shadows Come upon publication! You’ll also receive sneak peeks into what’s happening behind the scenes. Come take a look at the Patreon campaign! Make a pledge!

You can be a part of the project! Get your name inscribed inside the book! CLICK HERE 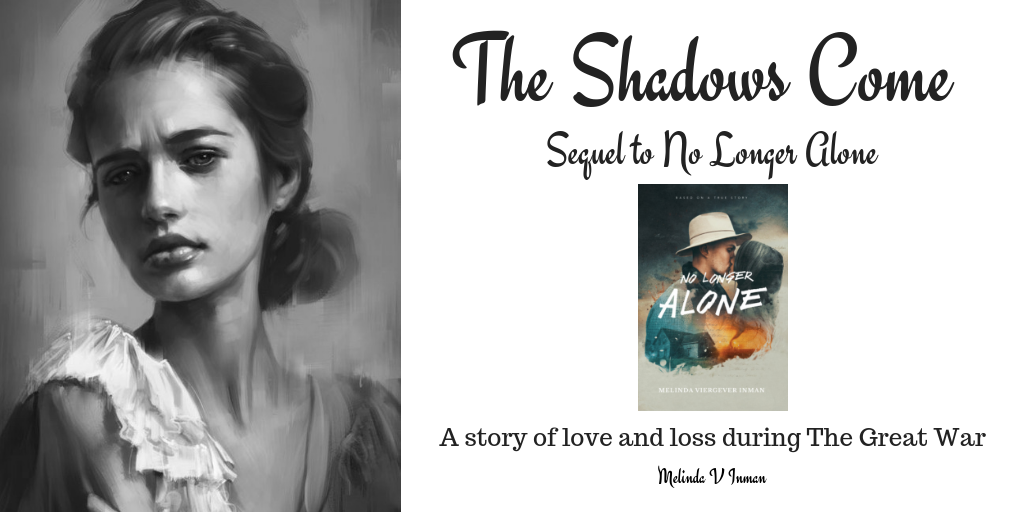