When we were raising our children, we were always on the lookout for good literature for middle grade or young adult readers. When we found a good writer of that type of book, we usually bought everything he or she had produced. Our home library needed to be stocked as our six children moved through school.

Today I’m featuring just such an author, in the hopes that readers will take a look at his work and make his work a regular purchase for your growing families. He’s offering a new book for sale, accompanied by two books for free. I’m adding my novel Fallen for free to sweeten the deal. Three free books, one purchase.

Nathan Roten has written a MS/YA action/adventure and urban fantasy series. In a similar spirit to C.S. Lewis, the novels are not overtly Christian, but have characters that parallel Christ and Satan and have clear biblical undertones.

During the day, Nathan works at Samaritan’s Purse – Operation Christmas Child, where he enjoys being a part of worldwide children’s evangelism. At night, however, he is an aspiring novelist, writing action/adventure, modern fantasy novels.

Nathan Roten began his writing career in the non-fiction world with the publication of Embark, but has now dedicated all of his creative juices into creating the Adventure Epic novels of the Aegis Series. He is currently working on book 3 in the series along with many of the Character novelettes.

His goal in the series is to produce quality action stories that are clean, exciting and contain important, biblical undertones. If he is not writing, he is either at the lake or roaming the Appalachian Mountains of North Carolina with his wife and 3 children. You can connect with him at www.NathanRoten.com.

In celebration of the release of the newest AEGIS Character Novellete – Mission Alpha – Nathan is giving away two books. Buy Mission Alpha during this launch week and get AEGIS: Catalyst Grove and Recollection free!

What do you do when you encounter the impossible? It is 2003 during the first stages of Operation Iraqi Freedom. The mission is to infiltrate a key Al-Qaeda compound to secure intel on the whereabouts of Saddam Hussein, underground terrorist cells, and WMDs.

Eric Branson is a seasoned Green Beret with one more tour standing in-between him and the sweet soil of the USA, but not even his extensive experience will prepare him for the supernatural events waiting for him inside the walls of the compound. Meet the Eric Branson before he became AEGIS and walk along side him in real time as he unknowingly crosses a threshold from which he will never return.

And Get these Freebies:

Be Careful What You Wish For. It May Just Be Given To You.

For many nights in Greenwood Orphanage, visions of his loving parents flood the dreams of 15-year-old Graham. But the dreams quickly dissolve into haunting nightmares. Just when Graham thinks he will escape the darkness of his mind, he wakes up to find his possessions hovering in the air all around him before they crash to the floor.

Graham thinks he’s a danger to his friends, and in an effort to control his unexplainable power and protect those around him, he goes in search of the one man who may hold the answers. That is until he finds himself captured by Aegis, bound, with his head shrouded in a black hood. Nightmares seem the least of his worries now.

What is this group called Aegis? Why do they have similar supernatural powers? And what do they want with him? With Graham’s power becoming more unpredictable with each turn of events, he questions whether knowing the truth is worth risking everything—even his own life.

The AEGIS Series is a Children’s Urban Fantasy Saga following Graham’s journey to discover his true nature. Any fan of the underdog story or a coming of age tale where the odds are stacked up against the unlikely hero will want to pick up a copy of the AEGIS Series.

Love takes action. The Creator God establishes the cosmos and shapes a man. Adam rises from the dust. Envious, the powerful angel Lucifer despises him. Oblivious to the threat, Adam is captivated by his strong, intuitive wife Eve. In the Garden of Eden, they enjoy abundant food, gorgeous vistas, and intriguing challenges, including their budding love and passion. They have it all!

But Lucifer’s deceptive brilliance tricks them into disobeying God. Their unity with one another and with God is destroyed. Lucifer’s jealousy threatens mankind’s tenuous beginning. But God is merciful. What astonishing promise does He make? How will Adam and Eve survive – broken, shattered, and separated from God? 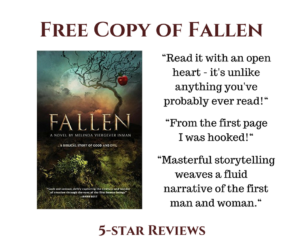