The second half of this year, I got lost in the darkness. I scraped the bottom. My illness worsened, our home flooded from a broken waterline, my husband caught an awful protracted virus, which he passed to me, and then he had an invasive biopsy. I drew inward, I quit focusing on the positive, and it affected my relationships. I didn’t administer the medicine of a joyful heart to myself (Proverbs 17:22).

As I write this from that time of heartache, I’ve cried for the last four hours. My face is red, my nose is snotty and swollen, it’s past midnight, and I don’t expect sleep to come anytime soon. I’ve just been hurt badly by someone I love, and I feel insignificant, small, and invisible.

Autoimmune chronic illness has brought much misunderstanding into my life, for it never ends, it’s largely invisible, and it brings me to the bare bones of myself, which often results in self-centered behavior and lack of empathy. On top of feeling flu-like, fatigued, and in pain, I’m sometimes pulverized emotionally by people I love, for they are also human and sick of me being sick. Often I need the pulverizing.

This is why God’s nearness and understanding are so important. We all come to those moments when even the people we love aren’t there for us. It happens. Maybe we’ve made it impossible for them to be there through our own behavior.

Think of how a long wintertime flu strains relationships, especially if it’s passed from one to another, and the unpleasantness continues for week after week. The coughing, scratchy throat, nausea, congested head, piles of tissue, sleeplessness, and cranky edginess wear everyone down. Everyone longs for good health again. We whine.

Now imagine that one of you doesn’t get well for years, or maybe never again. The unpleasantness continues indefinitely. Therefore, when the normal bumps of life occur on top of an already unrelenting chronic illness, it becomes unbearable. Even when not speaking or acting unpleasantly, still, there is no positivity or cheer to give to others, but rather simply trying to get through it without blatantly sinning.

When I penned this post in October, it was such a time, and it had been this way for a few months, day after day after day.

I simply wanted to be myself, not a sick version of myself. I wanted to be a healthy wife and mother, not a flu-like one. The disconnect between how awful I feel inside and how I try to act on the outside can sometimes be such a wide gulf that I often whisper a query to those in the know: “Do I look normal?” Those months were such a time. 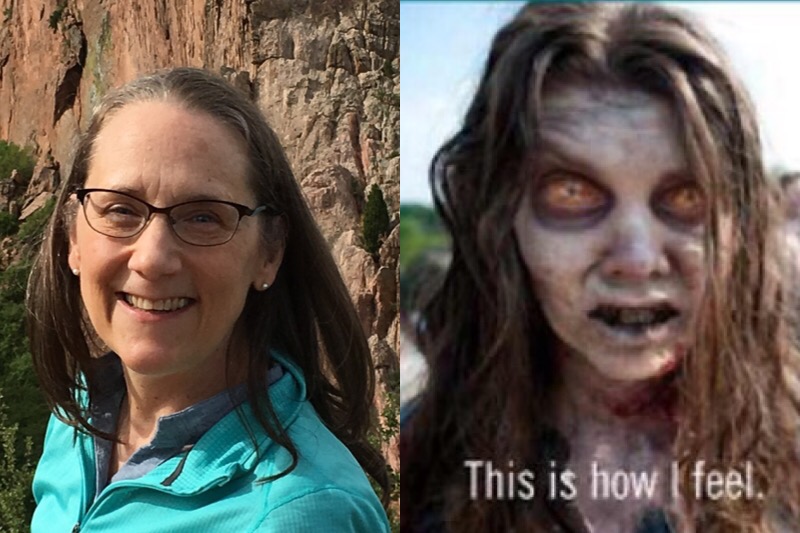 But, if I had never gotten this sick, I wouldn’t have realized this truth: Jesus probably never felt “normal” in a human body on earth.

What a disconnect for the Creator of the universe to feel human pain and sickness and to be compressed so! This would have been His daily experience. Yet the enormous relief I feel simply knowing that He knew it would be like this, and yet He came anyway, causes me to turn to Him repeatedly when no one else would ever understand.

Since the children have flesh and blood, he too shared in their humanity so that by his death he might break the power of him who holds the power of death—that is, the devil—and free those who all their lives were held in slavery by their fear of death…For this reason he had to be made like them, fully human in every way, in order that he might become a merciful and faithful high priest in service to God, and that he might make atonement for the sins of the people. Because he himself suffered when he was tempted, he is able to help those who are being tempted” (Hebrews 2:14-18 NIV).

Our High Priest knows. He has felt the disconnect between the inner person and the decaying shell of a body. He listens and truly understands. He is not ashamed of me in my illness. He doesn’t doubt how awful I feel merely because I’m able to plaster on a smile. He doesn’t forget that I feel vulnerable and alone. He knows I will not suffer perfectly. He did that for me. By His stripes I am healed.

The Lord is near. I can run to Him. I can cry over today’s inability to be selfless while sick. He pleads my case. He is my advocate, and I can find mercy. Nothing can separate me from Him.

“Who shall separate us from the love of Christ? Shall trouble or hardship or persecution or famine or nakedness or danger or sword? For I am convinced that neither death nor life, neither angels nor demons, neither the present nor the future, nor any powers, neither height nor depth, nor anything else in all creation, will be able to separate us from the love of God that is in Christ Jesus our Lord” (Romans 8:35, 38-39).

To these truths, I cling. What are you clinging to this season?