When Mary and Joseph made the trip to Bethlehem, it was an unusual decision and a God-ordained event. Through the providence of God, Caesar Augustus was moved to hold a census at just the exact time needed to summon Mary’s betrothed to Bethlehem to register. Joseph’s decision that she accompany him was also unusual and unnecessary. Since only men were required to register and pay taxes, he normally would have gone alone. Women didn’t usually leave the circle of their female relatives when it was near the time to give birth, for these were their birth attendants. Yet Mary did.

God moved Caesar. God moved Joseph. God moved Mary. The Messiah was to be born in the city of David, and God orchestrated the events to put his birth there.

Mary and Joseph’s decision would have been filled with turmoil. This young woman had already yielded herself to a reality that had ruined her reputation and almost ended her betrothal to Joseph. He had considered divorcing her, knowing full well that the child was not his. Yet Matthew tells us that an angel of the Lord spoke to Joseph in a dream, telling him not to be afraid to take her as his wife. And so Joseph did.

Mary headed to Bethlehem not knowing who would deliver her baby. By going with Joseph, Mary yanked up all the roots. After yielding her virginity to God to produce his Messiah, she now exposed herself even more to the unknown, for women then birthed within their own circles. Mary fell even deeper into the arms of God, leaving it entirely up to him. 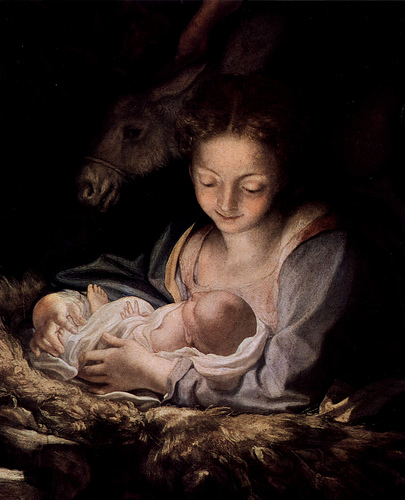 Photo by Waiting For The Word

What was a relatively easy trip for a man became terribly complicated when taking a woman near birth. Rather than spending a couple of weeks away, Joseph’s trip became a relocation. Mary would not be able to travel for weeks afterward. Joseph would now have to take along his carpentry tools, so he could support their family in Bethlehem. As he packed for the trip, he had no idea they would also flee to Egypt to escape Herod, who would try to kill their baby. This relocation upended their lives for several years and put them in a foreign country as refugees.

They didn’t travel in comfort. It was a rugged journey that would have encouraged the start of Mary’s labor. When they arrived there was no place to stay, and she delivered in a barn or cave surrounded by livestock. Who knows if she had other women with her. Joseph may have caught Mary’s son with his own hands, and then set up a carpentry shop in a nearby home. Matthew tells us that when the wisemen arrived, Joseph, Mary, and Jesus were housed.

The circumstances of Jesus’ birth were complicated, inconvenient, anxiety producing, and doubtless overflowing with emotional turmoil. Even in his birth, Jesus came right into our lives, invading the grittiest and most intimate places where we live. Nothing tidy here. As I consider my current circumstances, I’m in awe of Joseph and Mary’s obedience to God and their response to the gentle urgings of the Holy Spirit.

This Christmas season, we’re selling our home and moving. Our relocation is tidy compared to Mary and Joseph’s. We travel in greater comfort. We will find room at the inn when our home is empty. We know where we’re going. We will fly to our destination. We work with a relocation team.

Yet my emotions are still wildly agitated. I’ll be leaving dear friends and the familiar. Though I’m far more comfortable than Mary and Joseph, I’m also really not in control of anything. I’m filled with angst one moment and with joy the next. I’m torn in two as I leave the proximity of some children to be near other children. I’m fearful of what might lie ahead, even though God works all things together for our good.

Mary and Joseph’s faith astounds me. God entered into the most intimate and sacred parts of their lives, and he made, from a human perspective, what looked like a mess. Still they stepped forward in obedience. They set the Christian model as the first believers in our Messiah. They trusted God even when it was messy, complicated, and frightening.

I think often of them and compare my circumstances to theirs. I come up short. God has blessed us with many examples of weak human beings who walked off the cliff into obedience to him. The model is solid. The God we serve is worth it. I pray that I might follow in their steps, simply obeying God, regardless of my quaking emotions and inner turmoil. This is true faith.