As the mother of a large family, I lived in tight community for decades. We moved in crowded circles, traveling in packs of sports parents, music parents, dance parents, debate parents, homeschool parents, and theatre parents. Other than a brief six-year period in the middle of our thirty-eight years of childrearing and launching, our houses were small. Quarters were cramped.

Moments alone were rare. Noise was constant. Interactions were frequent.

These were the precious years of raising a family and making a home.

Like all young mothers, I occasionally stepped into the bathroom simply to find a quiet space. Even then, small hands and tiny fingers would appear under the door attempting to reach Momma. Within a few minutes, someone larger always knocked. Even when attending to private toiletry needs, a child usually spoke to me through the door.

An introvert mom, I would sometimes step outside and around the corner of the house to sit under a tree and grab a few moments of solitude to simply think. Within a few minutes young voices would begin to echo in the house, calling for me, and several minutes later a small head would peek around the corner.

I would smile, grab up the little one, and return to the bustle. The memory warms my heart, for those were the best years of my life, full days of great blessing!

Now they’re all grown, we live alone, we’re in a new city, and it is quiet. As I look back on those years, I wonder how they flew by so rapidly. This time of being alone is teaching me a lot about myself. 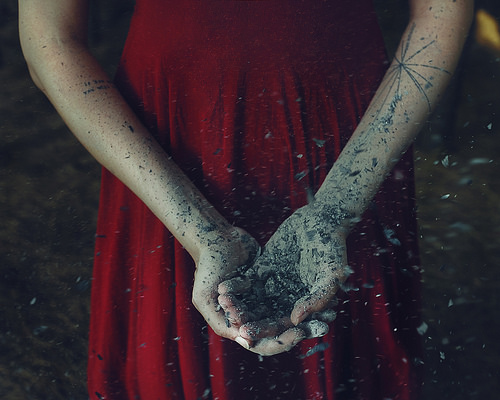 I dodge the Lord. My heart is still prodigal. I busy myself with work, thoughts, reading, and time-wasters. There is often distracting noise in my head and a social media peek on my phone. My quiet spaces used to be sought simply to talk to God. I didn’t recognize that I still run from him.

My sense of self is permanently altered. Being a mother forever changed me into a creature who is far less selfish than I once was. Thanks be to God! This is a good thing for a self-centered firstborn who as a teen informed a friend that I had gotten all the questions “correct” on the personality quiz. Let that sink in. Loving my children provoked that change in me, though not everyone needs that catalyst for growth.

It was easier to work in chaos than I thought at the time. I drafted my early novels in corners of ballet studios and hallways of homeschool co-ops, in backrooms during play rehearsals and in blasts of frenzied writing after the drive from one activity to another. Now I have silence, and I find it’s harder to settle down and work. It doesn’t feel as pressing as it did when I had to fight hard to squeeze it in.

My season of alone started earlier than I had expected. Five years ago an autoimmune disease dropped me. The first year I was largely bedridden. As more time passed, most invitations to outings ceased, because I could rarely attend. One by one, this or that activity, ministry, friendship, or work had to end. I felt like I was in exile. God had pressing facts for me to learn about myself.

Alone, I made new discoveries about the depth of my flaws and my still desperate need for God. At first the absence of my children and outside community made me feel as if God had also departed, but Psalm 139 and his very name Emmanuel remind me of his constant nearness, even in the depths.

The God who came to die for us never leaves us.

Alone time is revelatory. I couldn’t have ferreted out these weaknesses until the Lord brought me to a place of quiet and only him. He has been with me all through the journey, superintending every moment, whether crowded and busy or quiet and solitary.

If you find yourself alone, feeling as if he has departed along with the crowd, rest assured that he has something personal for you. He always does. It will be painful. It will be joyous. It will be rich. He will draw you ever closer to know him and to be known. And he will become even more dear to you. Be still. Don’t resist.