The decoding of the human genome and, as a result, the development of DNA tests provide answers to those most basic of questions: Who am I? From whence did I come?

Our families have defined us, passing on their genes, telling us who we are, communicating stories, shaping and modeling life as they, and those who’ve gone before them, believe it should be lived. We follow in their footsteps, whether or not we know exactly who made those footsteps and where they were taken. We absorbed their mannerisms, their habits, and their ways of interacting. We look like them. We repeat their stories.

Recently in our multi-generational family, some of the adults near forty decided to investigate our heritage. Their DNA test results have now motivated older generations to participate. We’re all queued up to be analyzed. Why?

We are a people for whom heritage and story are vastly important. We refer to family stories often. We are motivated and inspired by those who’ve gone before us, even writing about them, so the story of our origins is known.

In bringing in DNA, we’ve now encountered some of the predictable surprises. Some of these have absolutely delighted us. Some have made us laugh as those facts explain everything. Some have puzzled us. As more of us get tested, all will become clear. For now, I’m focusing on the delightful.

Back in the days before personal computers, my brilliant philosopher-poet-scientist Grandpa Viergever spent years researching genealogy. His work was painstaking. When I was in my late teens and early twenties, I enjoyed hearing his findings.

We Viergevers are of “Black Dutch” descent. In short, many people have traversed to and from the Netherlands. Being a tolerant people, the Dutch often intermarried, plus they are a seafaring people, interconnected with Scandinavia, including the Vikings. So anything was possible. Our DNA shows connections all across northeastern Europe.

In our family, there was a scandal in 1880. My grandfather’s father, a swarthy young man of “Black Dutch” heritage, wanted to marry a blue-eyed blond Dutch girl of “pure” heritage. They all attended church together in western Michigan after their parents had emigrated from Holland.

Her family objected, because he was “Black Dutch,” and they knew what kind of “black,” for they had all emigrated from their joint familial birthplace. But she loved him, so the young couple staged a “kidnapping,” and they eloped, married, and produced eleven children.

Hurrah for love triumphant over blind prejudice! I state this with great pride. Yes, Lord willing, there’s a novel coming in the future. They’ve given me plenty of fodder for fiction. 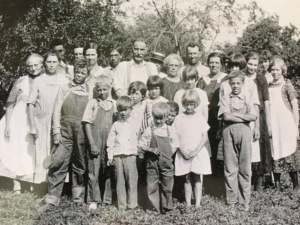 Right in the middle of this multi-generational photo, the tall, aged, and fierce couple are my great-grandparents who eloped.

So, their youngest son, my Grandpa Viergever (wearing the hat as he stands barely visible behind his 6′ 8″ father) was keen on discovering from whence came the “black” in the “Black Dutch.” Why was it objectionable to some, but not to others? His arduous research led him to two possibilities – “Moorish” ancestry or Jewish ancestry. He was convinced of the Arab connection and labeled himself “Dutch-Arab” from that point onward.

But there was no way to know then. Now there is. 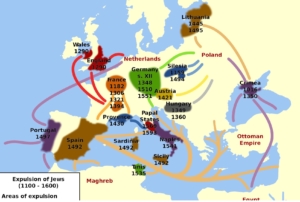 The route of possible Jewish ancestors fleeing from Portugal (Iberian peninsula) to the Netherlands. 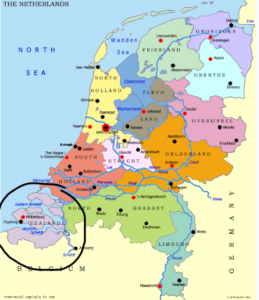 Zealand, the homeland in the Netherlands from which my Viergever ancestors emigrated.

This is why even the great-grandparents are queueing up to take the test. Our oldest living generation, my parents, just ordered their tests. The more generations we can include, the more clear and certain become the surprising results.

However, none of this is a surprise to God. In fact, he carefully wove together the tapestry of our family tree across all generations and continents, through every event that relocated and scattered ancient peoples (even the Inquisition in this case). Whatever the calamity, heartache, loss, or reward, God knew our days all along.

God knew me specifically all along, too. Me, their genetic product. Beforehand, he knew my children and grandchildren, too, every one. He knew what our DNA contained and the people it came from, for he knitted it together.

Exactly as he knows you just as intricately.

He orchestrated our life circumstances to put us here, where we are, at this place, with us being who we are, with the gifts, talents, foibles, appearance, intellect, weaknesses, and tendencies toward disease that we have.

We are exactly who we are supposed to be. There are no mistakes or blunders or mysterious unknown facts. It is all glorious and delightful, crafted by God. We are his handiwork, his poemia, all of us, his artistic masterpiece.

Thanks be to God for it!

What amazes you about what has God wrought in your family?