When the invitation from Kregel Publications arrived to review Day of Atonement: A Novel of the Maccabean Revolt, I jumped at the opportunity!

The author, David A. deSilva, is a distinguished professor of New Testament and Greek at Ashland Theological Seminary, the back cover informs us, and he is the author of three theological texts. At least one of these covers the history that supports this novel. 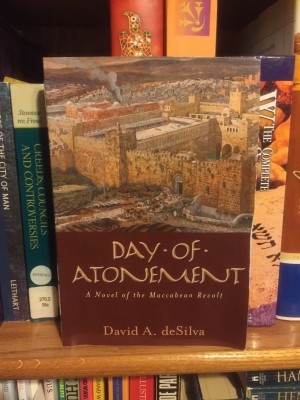 This told me I could expect two things:

As a fiction writer, I’m quite familiar with The Rules. In fact, knowing these rules makes it nearly impossible to let go and simply enjoy a novel. To do so, I must turn off my inner editor.

I was certain two issues would be a problem, because every fiction writer does both as we first start out. All the fiction writers are nodding, and they know what I’m going to say.

Rule #1: Rather than loading all the historical background and character history (backstory) up front, writers should try to weave it into the novel itself. This gives a more exciting beginning that hooks the reader.

Rule #2: There must be only one character’s point of view in each scene. Writers must not hop from head to head, first giving the inner thoughts of one character and then another within the same scene. Not only does it confuse the reader, but it also makes it more difficult for them to care about the characters. If they don’t care, they stop reading. This is the reason for the rule.

So, did I find these problems? Yes, but…

I’m a history geek. We readers of historical fiction are a curious breed. We don’t mind extra historical information at the beginning. We’re here for the history.

Even so, I found it difficult to persevere through the opening two chapters. There were so many new names and facts to absorb! Of course, having finished the story, I now know why the early information was essential.

So, dear reader, hang in there! You will be glad you did!

Hint for the reader: There’s a list of characters on pages 316-319, which I didn’t discover until I finished, though it’s listed in the Table of Contents. Also, I found this helpful timeline.

Disclosing various characters’ thoughts, even on the same page, continued throughout the novel. Sometimes it confused me, and I had to figure out whose point of view was being stated. Plus, it took me a while to connect to the characters.

However, even with these two issues, I highly recommend this novel.

I came away with a passionate love for the characters and a deep respect for the methods they used to handle their struggles.

DeSilva succeeded in making me care. Even though the point of view continued to shift, the author kept me enthralled.

In other words, this man can tell a story.

The author used fictional characters’ lives interwoven with actual living participants, creating a rich fictional tapestry. He layered and cross-layered local customs, attempts at Hellenization in Jerusalem, desecration of the Temple, the era’s acceptance of The Book of Enoch, maniacal machinations of “the bad guys,” and the faithful lifestyles and responses of the believing Jewish people.

I acquired a more thorough knowledge of the people and the customs of the era of the Maccabean Revolt. The story holds a treasure of historical detail and intrigue.

I may read it again, just so I can reexamine those early facts that didn’t initially hook me. After finishing, not only had I learned much history, as I had set out to do, but I was also affected on a deep emotional level. And that, to me, is the sign of a good historical novel.

One tip for the reader: Don’t hold your breath until Mattathias and his sons show up. Oh yes, they’re there, and they are heroic; but the story is far more effective when presented as the author has done. You can trust him.

After reading this you’ll view the Intertestamental Period with greater understanding, you’ll have a better grasp of what desecration of the Temple truly means, and your mind will be filled with courageous, living characters who keep you awake at night.

You can find Day of Atonement HERE and HERE!