Backstory: noun, plural backstories.
1. a narrative providing a historical or background context, especially for a character or situation in a literary work, film, or dramatic series.
2. prequel, prologue.

Think the opening scenes of most superhero or children’s movies, or the lengthy prologue of a James Michener novel. You may not know it, but in today’s fiction writing, prologues are no longer the acceptable way to begin a story. The reader of yore (and apparently young children, their parents, and superhero fans) wanted to delve into the history and setting before beginning the tale.

Not so the modern reader. Unless you’re part of the Disney, Pixar, or Comic-Con crowd.

Now the novelist is expected to jump right into a story, to cut to the chase. As a result, some readers often spend the first chapter flipping back to double check names and trying to remember who did what, since we don’t know the characters. Yet they may already be killing other equally mysterious characters.

To prevent reader confusion, the modern writer must master the fine craft of sprinkling backstory details throughout the novel, rather than sticking them all in a prologue. This must be done in a way that hooks the reader. The author must know what is most important, must learn to share only what is significant, and must avoid explaining. And you thought writing fiction was easy!

As readers observe the characters’ actions coupled with the slow dribble of backstory, you are drawn into the imaginary world woven by the author. You then truly know the characters and care what happens to them. In solving the puzzle, you have become part of the story.

Most writers have conjured an in-depth prologue and backstory for each character. But we don’t tell you all the details. These facts are for our own use, so we can develop rich and fully formed characters. Their actions are driven by these backstory facts, and as you discover these pieces, our characters then make sense to you.

But some of us still like a prologue, so I’m sharing one with you today. For lovers of backstory and fans of prologues, click below to see this author’s secret file – the prologue of No Longer Alone, the part-factual-part-fictional family backstory of this novel’s main characters. Many of the events in this file took place in the locations pictured above and below approximately 125 to 200 years ago. Take a peek. 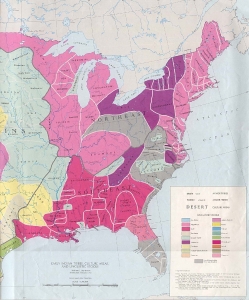